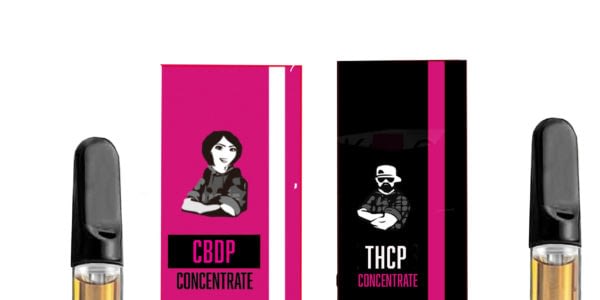 In the spring of 2021, the first THCP and CBDP hit the US market and everyone wanted in. Brands were quick to jump on the bandwagon, hoping to be one of the first to market. The THCP and CBDP was sold as a miracle cannabinoid. Hitting faster, stronger, harder than any other cannabinoid before it due to the seven side links (vs the five others have) that attach to our cannabinoid receptors.

With any new product, there are bound to be a few hiccups. One of the issues with THCP/CBDP is consistency. It’s like water. As THCP/CBDP is so strong, most of the cart’s content had to be made up of a carrier fluid. High viscosity terpenes, MCT oil, and other carriers were tried and tested with positives and drawbacks were found with each one. With such a thin consistency, it would almost make sense to smoke it like one would an e-juice. There was an issue though… THCP/CBDP requires a fair amount of heat to work and hardware for e-juice doesn’t get that hot. High-quality carts with small holes became the solution, but with the summer heat there was still a fair amount of leaking. Issues were presented and (most) solved.

How anyone really “feels” when using THCP/CBDP is just now being realized. There have been very little research on THCP/CBDP and user-experience data is non-existent. Sconi Boys was one of first brands to carry THCP/CBDP. The following are reports from Sconi Boys users as well as reports from social media outlets where users have recalled experiences using other brands.

Customer “Joe” took the CBDP had been suffering from chronic pain. After taking it he cried for joy. It was the first time in years he felt no pain. The feeling lasted for 12+ hours. He woke the next day and still was pain-free. By nightfall though the pain came back. Joe hit the cart again, waited and an hour no relief. He hit the cart a few more times and the pain was gone.. but it only lasted for fifteen minutes this time. He attempted to use the CBDP cart the following days buy he was unable to replicate his pain free day.

Customer “Amy” decided to take CBDP to see how it worked on her stress relief. She took three large puffs and immediately began to feel a calm flow over her. She was amazed and how calm she was yet still could go about her day at work. The effects lasted for several hours. Amy took and had the same effects the following days.

Customer “Bryan” tried THCP mixed with CBG and some hash. Within a few moments, he felt calm and relaxed. He noticed he was in a bit of a trance-like state, but mentally alert. His typical boring night of tv morphed into the most amazing thing he had ever watched in his life. The hues of the tv felt like they were all around him. He watched blue and green light creep up onto the wall and onto the sofa next to him. He had an enjoyable night watching the tv next to “his colors”. He slept well and no longer felt effects the next day.

Customer “Jason” took several drags of the THCP, waited an hour an felt nothing. Jason then mixed the THCP with Delta 8 and CBN and took a few more hits. He felt the normal effects of the Delta 8 and CBN but they were intensified. He thought THCP to be a good companion cannabinoid but didn’t do very much for him on his own.

Customer “Riley” was huge marijuana and Delta 8 smoker. She took several long drags of THCP with her box mod. Her eyes immediately began to feel heavy and she drifted away into a cloud of bliss and relaxation. The following day Riley tried the THCP again. She felt nothing. She thought perhaps she had overdone it and needed a break. Several days she tried again with minimal results.

Customer “Michelle” took several hits of THCP with a vape pen. She felt “something … maybe” but nothing like how she thought it was supposed to feel. Frustrated Michelle broke open the cart and decided to eat some of the THCP. Michelle began to feel extremely tired and fell almost instantly into a deep sleep. She slept all night and most of the next day. On the third day, Michelle felt a strong body buzz with relaxation, head cloudy and body buzz. On day four Michelle woke up with a body buzz, Any relaxation she may have been feeling diminished as she realized she has been essentially under the effects for a full work week.

CBG. The Power of the Flower
June 10, 2021
SEARCH
CATEGORIES
Go to Top